✓ All The Game Console Repair Backed by Limited Time Warranty

Is your PS system freezing up? Is your controller failing to connect? Is the console overheating? Are its ports damaged?
Just bring your PlayStation right over to ER4GADGETS, the premier PlayStation repair service in Houston. Our years of experience in repairing PlayStations tell us we will probably have a solution for you.
If you live in Houston TX, and are facing the perils of a malfunctioning PlayStation, here’s how we can help you.

The Sony PlayStation is undoubtedly the world’s most popular gaming console. Today, there are over 100 million PlayStation users in the U.S. alone. As of September 2022, the PlayStation is dominating the video game console market with a staggering 86.84% share. The first PlayStation console was released in Japan in 1994. It was one of the first consoles to deliver 3D graphics. As a CD-based console, it also rivaled the Nintendo 64, which was still using cartridges. Two years after the PS1’s release, the DualShock controller was released, with its signature double analog sticks and controller vibrating capabilities. In 2000 came the PS2. Although it wasn’t necessarily the most powerful console on the market, the PS2 was undoubtedly the most dynamic: it was with the PS2 that gamers got their first taste of HD video games. Then came the PlayStation Portable (PSP), a handheld console that had Wi-Fi connectivity, media playback functionality, and a built-in web browser, among other things.
Since then, we’ve had 3 more generations of PlayStations, with a flagship, budget, and special editions of each. The latest is the PlayStation 5, with its accompanying DualSense controller, which is wireless.

Named after the blinking blue light in the middle of a PS4, this is probably the most serious PlayStation system dysfunction. It occurs when the video output stops working and causes the machine to shut down.
There are many reasons why this may happen, from a faulty power supply cable, a corrupted hard drive, a glitch in the PS4 logic board, or corroded solder joints.
But there is a fix even for the blue light of death! We can trace whether it is a matter of software or hardware malfunction and offer possible fixes depending on the diagnosis.

The clearest sign that your gaming console is overheating is a blinking red light, also called the “red light of death,”; one of the most common problems requiring repairs. This light flashes continuously until the console shuts down, at which point it needs to be allowed to cool.
And the best way to prevent overheating is to ensure that the gaming console is on a flat and hard surface and in a well-ventilated area.
However, if you are facing this problem repeatedly, there might be a deeper issue at hand. Our professional PlayStation technicians in Houston TX can help.

The HDMI pins or ports of a PlayStation can sometimes snap, or get damaged, due to their fragile nature. At ER4GADGETS in Houston TX, our certified technicians possess the appropriate tools and precise soldering skills required to carry out expert console repair in Houston.

The soft rubber padding on the analog sticks of the DualShock controller is prone to tearing. But there’s no need to throw out your controller—ER4GADGETS in Houston, TX, can repair or replace the controller analog sticks with genuine parts!
Furthermore, if you are facing controller connection issues, we can also repair those in a jiffy.

If you have an earlier version of the PlayStation 4, there’s a chance you’ve had to deal with a malfunctioning optical drive. While some consoles automatically eject discs after insertion, others seem incapable of ejecting discs. If your PS4 has ever overheated, then it’s likely this was the cause of random disc ejections.
At ER4GADGETS, the #1 doorstep gadget repair service in Houston TX, we can fix that right up for you.

An issue reported mostly by PS4 users is a screen that randomly goes dark. This might happen even when the console has been powered on and seems to be running normally. Other times, the problem might occur only when attempting to run certain applications or video games.
At ER4GADGETS in Houston TX, we can not only identify the source of the problem but repair it for you.

Does your game or Blu-Ray disc spin in your PlayStation’s disc reader, but nothing happen on the screen? Or does the gaming console display error messages related to reading? Then there might be an issue with the laser lens. Well, we can repair it or fit your PS with a genuine replacement part right here in Houston TX.

Is your PlayStation refusing to turn on no matter what you do? This can be caused by a number of issues stemming from software, hardware, or firmware. Although you might be able to fix software and firmware issues on your own, this is not recommended as you might complicate things further.
And when it comes to hardware issues, it’s best to leave it to the professionals. In Houston TX, and that’s us!

It’s not uncommon for the fan of a PlayStation to suddenly be more audible than usual, especially when you’re using it to play particularly heavyweight games. However, if you’re experiencing excessive fan noise continually, it might need repair. Visit us in Houston TX, and we’ll repair it.

Why should you choose ER4GADGETS in Houston TX, to repair your PlayStation? There are so many reasons.

At ER4GADGETS, we offer same-day repair services for your gaming console, be it a PlayStation, Nintendo Wii, or Xbox One. Most repairs can be done in just a day and will be delivered to you on schedule.

Do you need to get your PlayStation fixed but aren’t finding the time to bring it for on-site repair to an official store? Well, good news—we offer free pickup wherever in Houston TX you are. Not only that, but once the repair is done, we’ll even drop it to your house free of charge. All you need to worry about is the repair charge. So, contact us today.

Yep, you read that right! We offer a limited-time warranty for all repairs done on PlayStations, no matter the model.

At the ER4GADGETS gadget repair store in Houston TX, we always stock genuine replacement parts. We understand that the construction of PlayStations and other gaming consoles is complicated; we would never risk your gadgets by using fake or secondhand parts during repair.

We offer the lowest prices compared to other companies offering gaming console repairs. At any rate, getting your PlayStation fixed at ER4GADGETS will cost much less than sending your device to Sony.

ER4GADGETS’ certified professional technicians in Houston have years of experience in fixing numerous issues found in gaming consoles and an array of other electronic devices, such as smartphones.

Yes! If you are unable to find or afford an official Sony retail store, you can visit our professional repair service in Houston TX.

Not outside of the 1-year warranty period.

3. How can I repair my PlayStation?

Here are some steps to try:
● Manually restart your gaming console
● Restart it in Safe Mode
● Try a different cable or power outlet
● Factory reset the console.
If these methods don’t work, contact us for repairs at an independent repair store like ER4GADGETS in Houston TX!

FREE ESTIMATE on Gadget Repair. Drop by our store at Richmond and Weslayan (between the areas of Bellaire and Greenway Plaza, south of Highland Village). Our trained repair techs can provide a free, no-obligation estimate to help you decide if you should fix what you have or go for an upgrade. Any mobile device from a phone to a tablet to a laptop, and even your gaming console, we can fix it. Often, we can complete your repair the same day, sometimes while you wait.

Have Questions about How Your Gadget Works?
Gadgets are fun, but all the many features can make it confusing. Call or drop by our store so we can answer your questions and show you how to get the most out of your electronic device.

Other Services you can get it 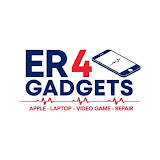 G G
They fixed my phone quick (took about 20 minutes), did the repair for a reasonable price, and gave me a free screen protector. Very kind ppl. Will return if I need anything else fixed.
Verify Us Verify Us